similar to for blandine&maciej, the piece consists of a probabilistic transition between two very close tunings and is based on an unmeasured notation. i was especially curious to experiment with this type of unmeasured notation when it is applied to 10 people all at once (or more exactly: one unmeasured voice made of the duo harp/guitar, and another unmeasured voice made of the rest of the ensemble). the performers were responsible for continuously re-creating some momentum in pacing, variety and expressivity in their way of playing, both on an individual and a collective level. most importantly, they had to listen to each other. the piece thus depends on a synergy between the different instrumentalists.

in general, i would say the piece presents many flaws and its core ideas are still at an embryonic stage, but i look forward to continuing to deepen them in future works. mostly, and especially since this was my first piece for ensemble, i'm grateful to have worked with a group of very committed & talented musician-experiencers:

i'm also thankful for all the contributions of the two tutors of the project, Cat Lamb & Jean-Luc Guillonet, as well as my fellow composer-experiencers: Thomas Nicholson, Augustin Soulard, and Zeynep Toraman. 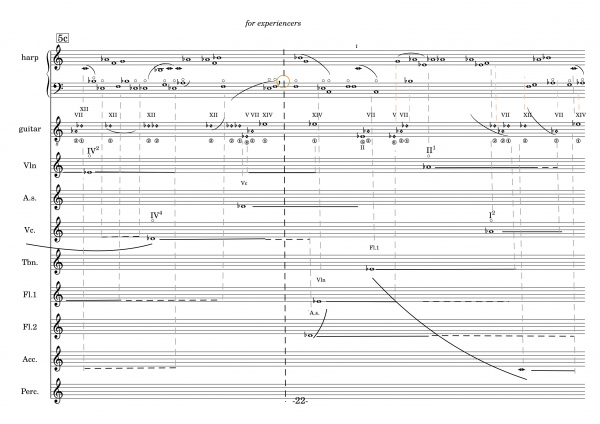 excerpts of the score & short video